From HTA to compromise 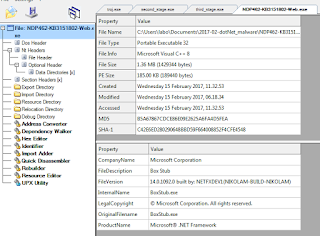 What make s .Net malware different from your classical windows malware   When building a .Net executable, source code is not compiled to object code but to an intermediate language called “MSIL” (Microsoft Intermediate Language) which uses JIT (Just-In Time) compile at execution time but the “Common Language Runtime” virtual machine. The virtual machine (execution environment) is a bit like the Java virtual machine except that the source code can be written in different high level languages like C#, VB.Net or even PowerShell. As a result, as it is also the case for Java, .Net executables are much easier to reverse to source code than executable written in C++, for example. Such executable must be disassembled and analysed in tools like OllyDBG/Immunity or IDA, mostly at assembly level. PE executables generate d for .Net applications are also a bit different in their “aspect” than other PE executables. For example: They usually need less imports; .Net resources are
4 comments
Read more
More posts